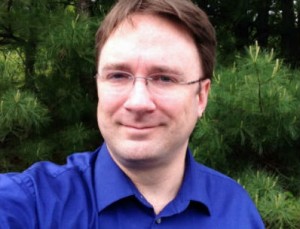 In 1986, Top Gun hit the silver screen. Fighter jets and Tom Cruise became the epitome of cool. The iconic movie made a big impression on Michael Pelletier—it inspired him to study aerospace engineering at the University of Michigan in 1988. Now more than 20 years later, he is leaning on his knowledge and passion for technology to complete Bachelor of Science in Information Science and Technology through University of Wisconsin Flexible Option.

As someone who began programming computers in grade school, Pelletier was better versed in computer technology as a child than most adults. He secured a job as a systems administrator at the Computer Aided Engineering Network (CAEN) before he even cracked a book at U of M.

He soon discovered he was more interested in computer systems than aerospace engineering, so Pelletier switched his major to focus on computer science programming. But just three semesters shy of graduation, Pelletier left school to start a full-time job to assist family.

The lack of a degree in a highly competitive, credential-focused field pushed Pelletier to consider completing his bachelor’s degree.

“I worked with a PC reseller, but soon accepted a job with National Tech Team, where I was heavily involved in contracts with Ford Motor Company,” Pelletier says. “After a few years, I was offered a job in Silicon Valley during the tech boom, so I packed up my family and we headed to San Jose.”

After five years in Silicon Valley, Pelletier moved to New Hampshire in late 2003 to work as a home-based systems architect, then secured a small contract for a job out of Boston. But he scrambled to find a permanent position before the contract expired.

That’s when Raytheon called and offered him a job in 2009. The company has a long history of technological innovation, specializing in defense and security technology—Raytheon even built the computer that guided Apollo 11 to its lunar landing. The opportunity has provided Pelletier excellent career success, including a recent promotion to principal engineer. But the lack of a degree in a highly competitive, credential-focused field pushed Pelletier to consider completing his bachelor’s degree.

“I was working on a project with software from the University of Wisconsin, so while I was researching, links to UW Flexible Option kept showing up on Google,” Pelletier says. “I looked at other programs, but the structure, inflexible time commitments, and substantial expense just didn’t work. Once I looked into Flex, it was clear I would be able to do things on my own timeline, at my own pace, and it was affordable.”

“My job keeps me busy, so it’s helpful to be in control of my schedule.”

In between preparing presentations to company CEOs, receiving the Excellence in Engineering and Technology Award, and prepping for industry conferences, Pelletier says fitting in school is a challenge. But he notes that access to his Academic Success Coach and the ability to map out his schedule have helped him not only ease that time burden, but also excel as a straight-A student.

“My job keeps me busy, so it’s helpful to be in control of my schedule,” Pelletier says. “The ability to pick up my studies when I am ready, rather than having to be in class at a certain time, makes a huge difference.”

Using what he knows to earn a degree quickly

Pelletier says he’s also impressed with the ability to use his extensive knowledge and prior work experience to advance more quickly through the Information Science and Technology program competency sets—but also with the unexpected amount of new information he has acquired.

“The flexible Information Science and Technology program…allows me to tackle my education and career goals in a way that fits my life.”

“With some of the introduction courses, I was really unsure of how relevant they would be to my education,” Pelletier says. “I find the competency sets very relevant. The early course material has provided me with the domain-specific vocabulary and intellectual framework in which to place the knowledge and experience I’ve gained over the years.”

While Pelletier anticipates it will take a couple of years to complete his UW Information Science and Technology bachelor’s degree, he is determined to continue his success in the classroom, hoping it leads to even greater success in the office.

“The flexible Information Science and Technology program is just the approach I was looking for,” Pelletier explains. “It allows me to tackle my education and career goals in a way that fits my life.”

To find out more about the UW Flexible Option and whether this competency-based education option is a good fit for you, call a friendly enrollment adviser today at 1-877-895-3276.